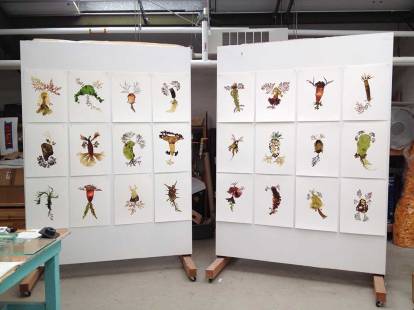 part of Copepodilia in my studio

The amount of seaweed that washes up in Stillwater Cove is amazing. It seems to be vastly more than any other beaches in the area – forty or so types as opposed to four or five. It’s amazing. And smelly. And I’m learning that the amount also depends on the time of year, with late summer bringing in huge swaths, making deep and wide tidelines.

Just as I was starting to learn the names of all of these different algae, I read in Melanie L. J. Stiassny’s “Opulent Oceans: Extraordinary Rare Book Selections from the American Museum of Natural History” that copepods were the most numerous animal on the planet, and that they inhabited nearly every body of water on earth. I’d heard the name copepod but didn’t really know what it was. I looked it up, but then stopped… and before I could fix a factual understanding of copepods in my mind, I started making these imaginary ones, using the Victorian art of seaweed pressing. They share the basic anatomical structure of copepods, but then veer off into quixotic possibilities, largely dictated by the seaweed itself. The final series has sixty-four prints, 22″ x 17″ on Arches cold press. The final prints have an uncanny three-dimensional realism, yet also look like watercolor in places, bleeding into the paper. There are a few more on my website.